Funeral Mass for non-practicing Catholic?: Q. May a Mass of Christian burial be celebrated for a baptized person who has been, for many years, away from the Church? (East Springfield, New York) A. Yes, absolutely.
The Church's Code of Canon Law states, in fact, that every Catholic has the right to a Catholic funeral, and the wording of the canon is strong: "Deceased members of the Christian faithful must be given ecclesiastical funerals according to the norm of law" (No. 1176).
I had to laugh at one of the comments, that was reacting to this article in The Pilot.  It said, "What difference does it make, he's dead."
Obviously, funerals are for the living who are trying to do the last thing they are able to do for their beloved deceased.  That being said, it is true that the deceased is unable to have a say in what type of funeral he has.  I always think of St. Dominic.  He wanted to be buried in a pathway so his friars would be walking over him.  Instead, he's buried in a monument, that took centuries to complete, even Michaelangelo contributed to its construction. 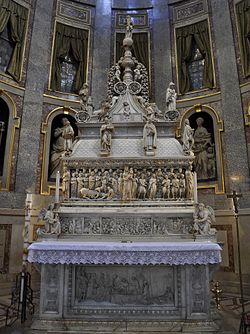 The Olympic Flame and Apostolic Succession

The Olympic Flame and Apostolic Succession When trying to explain apostolic succession, I’ve often linked the concept to inheritance, i.e....