This man-shaped bread represents Jesus Christ in John 20: 24-29.  It's a jelly sandwich.  My granddaughter made the five wounds of Jesus in the sandwich.  The jelly oozed out.
Thomas' questioning led to Jesus saying, "...blessed are those who have not seen and yet have believed."  That's you and me.
Thomas is his own person.  Remember he's the one who wanted to die with Jesus. (John 11: 16)  He also didn't just go with the crowd--hence his insistence on seeing the resurrected Jesus.
Thomas is a good model for us.
at April 20, 2021 No comments:

Email ThisBlogThis!Share to TwitterShare to FacebookShare to Pinterest
Labels: John 20: 24-29

Stained glass windows depict many things.  Some are saints and some are parishioners' choices.  This is one is of a sailor.  I wish I knew where it came from. 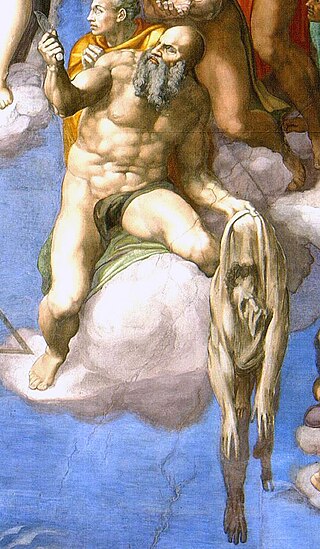 This picture is gruesome.  It depicts St. Bartholomew holding his skin because ne was skinned alive.  The picture is from Michaelangelo's The Last Judgement. 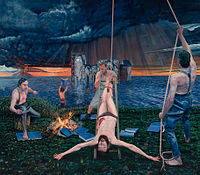 This is also St. Bartholomew being crucified. Was it before or after being skinned alive? 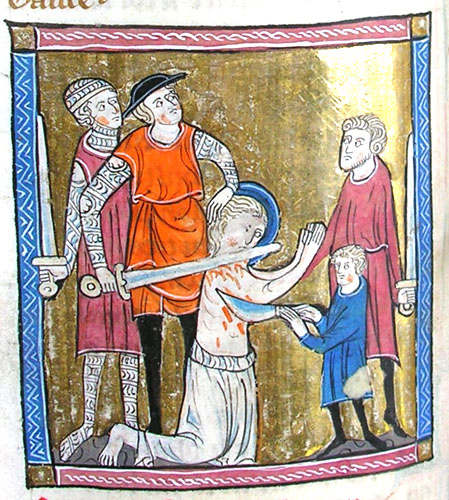 And finally, this last indignity must have surely been the end of Batholomew.  He was beheaded.

St. Bartholomew must have the most depictions of his death than any other apostle.  His name is sometimes Nathaniel and he was probably a fisherman, like many of the other apostles.

If Rodney Dangerfield was a Franklinite

You think it’s easy being me?  It’s not. Let me tell you.  I won tickets to the movies.  The theatre was called the Zeotrope.  It’s been gone for over 10  years.  I can’t get no respect.

When I was a child I learned how to swim at Beaver Pond.  The trouble was that my parents dropped me off at the dump across the street from the pond.  No respect I tell you.

I got a library card at the nation’s first library, the town library.  I was seven years old and could barely read.  So I didn’t know I was locked in the elevator instead of the children’s room.  I tell you, I’ve lived a hard life – no respect!

My teachers taught me all about Ben Franklin and how the town was named after him and he gave the town some books for our library.  But he died in Philadelphia, so my teachers gave me a one way ticket to Philadelphia.  I have never been given any respect.

When I graduated from Franklin High School I was given a blank diploma.  When I complained I was given a diploma with the wrong name.  I complained again and the principal crossed out the name and wrote mine.  What’s even worse is that he misspelled Dangerfield.  He wrote Danger FAILED.  I didn’t dare complain again.

I brought the family to have a picnic on the Town Common.  We were playing hide and seek.  I looked for an hour and couldn’t find them. I had to walk all the way home…in the rain.   That’s NO RESPECT.

I joined TOPS at the Franklin Senior Center.  That’s a club, Take off Pounds Sensibly.  I didn’t lose any weight but I found out how to look like I did, just hang out with fat people.

I went over to the Mormon Temple on Jordon Road because I heard that they were good on genealogy.  I wanted to look up my family tree.  I found it, and found three dogs had used it.  No wonder I get no respect.  The apple doesn’t fall far from the tree.

These jokes were fun to write, but I know I didn’t do the justice that Rodney Dangerfield deserves.  He was a comic genius.  If you didn’t laugh at his jokes and the way he put them over, you ain’t human.  His shtick was putting himself down.  His catch phrase, “I can’t get no respect,” is famous.  When he died in 2004 and reached the pearly gates, St. Peter said to him, “I heard you got no respect in life;” which prompted Rodney to quip some famous no respect one liners.”  St. Peter smiled, laughed and then waved Rodney in. “Finally,” Rodney Dangerfield said, “a little respect.”

Revelation 2: 17
He who has an ear, let him hear what the Spirit says to the churches.  To him who conquers I will give some of the hidden manna, and I will give him a white stone, with a new name written on the stone which no one knows except him who receives it.

The hidden manna is Jesus Christ Himself, who come to physical life and His presence in the Eucharist.  The white stone was used in Jesus' time as a pass to enter an event or such, to which one had been sent in invitation.  Jurors at trials also cast white stones to signify not guilty.  The new name will be given to us by Jesus which will embody who we really are.

What will my new name be?  I bet it's the same one I have, "Faith."  The hidden manna that I receive at Mass won't be hidden at my death.  Jesus will hand me a white stone with my new name.

Lord, let me not fear death.

As I age, I feel myself running towards Jesus.  At times, death can't come soon enough.

I will prepare for death by trying today to please You more and more.  If I live as You desire, I will be ready for death at any moment. 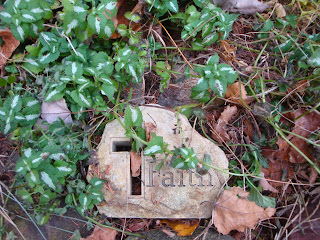 But Jesus is BIG! My grandchildren and I made a diorama on the story of the Road to Emmaus.  Here is the picture.  The two people traveling are together.  Jesus is alone on the right. The girls understood and liked the story but they objected to two things.  The first was that Jesus was smaller than the other two figures.  They couldn't get over the fact that Jesus wasn't the biggest man in the story.  The other issue was that Jesus just disappeared after breaking of the bread.  "How rude!"
at April 13, 2021 No comments:

Email ThisBlogThis!Share to TwitterShare to FacebookShare to Pinterest
Labels: Luke 24: 13-35, Road to Emmaus

Nothing is Forever Except God

A. E. Housman's Smooth Between Sea and Land is depressing nihilistic. No wonder Housman was an atheist.  He thought that all that matters was in this life.  This life is nothing.  Everything will pass as the poet says.  What matters is our eternal life and that's what we should be working on.  Here's the poem.

Smooth between sea and land
Is laid the yellow sand,
And here through summer days
The seed of Adam plays.

Here, on the level sand,Between the sea and land,What shall I build or writeAgainst the fall of night?

Tell me of runes to grave
That hold the bursting wave,
Or bastions to design

For longer date than mine.

Shall it be Troy or RomeI fence against the foam,Or my own name, to stayWhen I depart for aye?

This man-shaped bread represents Jesus Christ in John 20: 24-29.  It's a jelly sandwich.  My granddaughter made the five wounds of Jesus...