Stony River by Tricia Dower is a worthwhile read.  It is promoted as a book for young adults, but I 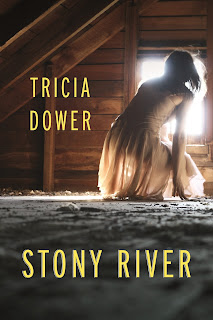 enjoyed it so much that I’m promoting it as a “coming of age” story for everyone.

This is a story about three girls in a small town, during the 1950’s.  One of the girls is dramatically different.  She was raised by an emotionally ill father, who fathers her child.  When her father dies, protective services places her in an orphanage.  Fortunately, a young mother watches over her eventually adopts her and mentors her fragile emotions.

The removal of this young teenager and her infant son from her crazy home was witnessed by the other two girls.  They happened to be just playing around the house.  But now, each one of their lives takes off in different directions.

Tereza comes from a dysfunctional family.  Her father beats her and her mother is too insecure to help her.  She runs away and finds herself married by fifteen and widowed—left with a baby and a dependent mother-in-law.  I don’t know why, but Tereza is my favorite character.  I was always rooting for her, but she lives a hard life and there’s no sun on the horizon.  She wanted to be an actress but can’t read; she has dyslexia.  I hope, Tricia Dower continues Tereza’s story in another book.

Linda is the good girl.  Her family is loving, maybe a little too controlling, but loving parents cover a lot of sins. Unfortunately, the parents have difficulties and Linda tempts fate.  She starts flirting with the wild boys and accepting rides from strange men.  She’s lucky because girls start getting raped and murdered.

Miranda is the young girl who was placed in the orphanage.  It turns out she’s an empath.  An empath is someone who feels the energy from people and objects. Perhaps her strange childhood with her father’s Irish paganism, mixed with the orphanage’s religious sisters’ mystical spirituality nurtured her empathetic gifts.  Miranda was adopted by Doris-the young mother. And Doris is her bulwark—her mother, sister, and best friend.  Miranda eventually uses her empathetic gifts to solve the murders.

These are the three protagonists.  I hope their stories continue in a series.  I liked them that much.  Stony River, like most good novels, is primarily about the characters.  Tricia Dower makes the reader care about all three girls, and the innocent baby, Cian.  That’s why I want more.

The setting is a close-knit community in the 1950’s.  Everyone thinks they know everyone and everyone’s business or think they do.  That’s why rape and murder shook their world in such a horrific manner.  Tricia Dower knows how to convey emotionally charged situations.  If you don’t feel Miranda’s panic when her baby was taken, then you’re not human.  Also, the fear and tension when Linda accepts a ride from a stranger is palpable.  Tricia Dower is an excellent writer.

Stony River is an intense story.  The characters are believable and interesting.  I recommend the book highly.  Although I was given the book to review, I was not required to write a favorable review.  This review is my own honest assessment.

Tricia Dower confesses to smoking a river punk or two in Rahway, New Jersey, where she was born and raised by perfectly fine parents who did not keep her hidden in a spooky house. You can find her on the “Rahway’s Own” website with other individuals the town has recognized for innovation and creativity. A graduate of Gettysburg College and a Phi Mu, she built a career in business before reinventing herself as a writer in 2002. Her literary work has crossed borders and won awards. She expanded a story from her Shakespeare-inspired collection, Silent Girl (Inanna 2008) into Stony River, which was first published in Canada (Penguin, 2012). Her novel, Becoming Lin (Caitlin Press), was released in Canada in 2016. A dual citizen of Canada and the United States, Dower lives and writes in Brentwood Bay, BC.


Free Raffle for Stony River
a Rafflecopter giveaway
at October 14, 2016

Faith, thanks for the review.

Sailing Along for Fifty Years

My husband and I celebrated our fiftieth wedding anniversary, earlier this month. As an anniversary present, one of our daughters gave us t...